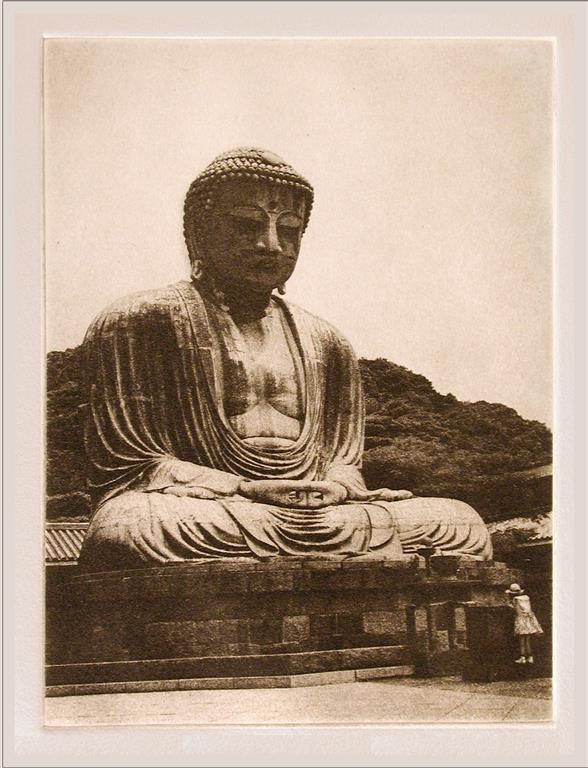 
In the United States, Daibutsu is available exclusively from Conrad Graeber.

For delivery to other countries, please click the rice image here:

On the page that follows, please enter $300 or equivalent in another currency. Your original photogravure etching will arrive at the address you write in the message space on that page.


You can also order Daibutsu with this form:

Survivor of fires, earthquakes, and tsunamis of tourists.

In 1495 a tidal wave swept away the wooden structure originally housing the Daibutsu; since then it has stayed imperturbably in the open air.

"The country betwixt Suruga and Edo is well inhabited. We saw many hotoke or Temples as we passed, and amongst others one Image of especiall note, called Daibutsu, made of Copper, being hollow within, but of a very substantiall thicknesse. It was in height, as wee ghessed, from the ground about one and twentie foot, in the likeness of a man kneeling upon the ground, with his buttockes resting on his heeles, his armes of wonderfull largenesse, and the whole body proportionable. He is fashioned wearing of a Gowne. This Image is much reverenced by Travellers as they passe there. Some of our people went into the bodie of it, and hoope and hallowed, which made an exceeding great noyse. We found many Characters and Markes made upon it by Passengers, whom some of my followers imitated, and made theirs in like manner."

-- John Saris, a 16th-century visitor, quoted in They Came to Japan, by Michael Cooper.

"But that which I did more admire than all the rest was a mighty idoll of bras[s], called by them Daibutsu, and standeth in a vallie betwixt 2 mountaynes, the howse being quite rotten away... This idoll is made sitting cros legged (telor lyke)... I was within the hollownes of it and it is as large as a greate howse. I doe esteem it to be bigger then that at Roads, which was taken for 1 of the 7 wonders of the world... It is thought 3000 horses would nothing neare carry away the copper of this. In fine, it is a wonderfull thinge."

O Ye who tread the Narrow Way
By Tophet-flare to Judgement Day,
Be gentle when "the heathen" pray
To Buddha at Kamakura!
To him the Way, the Law, apart,
Whom Maya held beneath her heart,
Ananda's Lord, the Bodhisat,
The Buddha of Kamakura.
For though he neither burns nor sees,
Nor hears ye thank your Deities,
Ye have not sinned with such as these,
His children at Kamakura;
Yet spare us still the Western joke
When joss-sticks turn to scented smoke
The little sins of little folk
That worship at Kamakura -
The grey-robed, gay-sashed butterflies
That flit beneath the Master's eyes.
He is beyond the Mysteries
But loves them at Kamakura.
And whoso will, from Pride released,
Contemning neither creed nor priest,
May feel the Soul of all the East
About him at Kamakura.
Yea, every tale Ananda heard,
Of birth as fish or beast or bird,
While yet in lives the Master stirred,
The warm wind brings Kamakura.
Till drowsy eyelids seem to see
A-flower 'neath her golden htee
The Shwe-Dagon flare easterly
From Burmah to Kamakura;
And down the loaded air there comes
The thunder of Thibetan drums,
And droned - "Om mane padme oms"
A world's width from Kamakura.
Yet Brahmans rule Benares still,
Buddha-Gaya's ruins pit the hill,
And beef-fed zealots threaten ill
To Buddha and Kamakura.
A tourist-show, a legend told,
A rusting build of bronze and gold,
So much, and scarce so much ye hold
The meaning of Kamakura?
But when the morning prayer is prayed,
Think, ere ye pass to strife and trade,
Is God in human image made
No nearer than Kamakura?