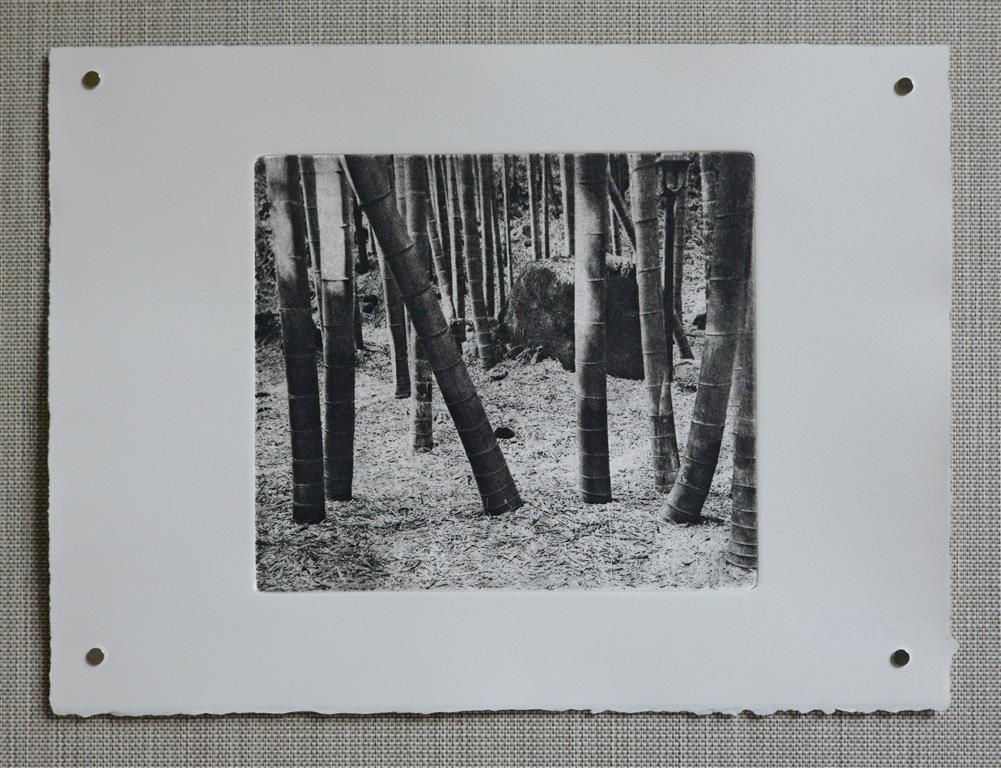 
You can order this print by clicking the rice image here:

On the page that follows, please select your currency from the drop-down list, and enter $470 or equivalent in the space provided. Please write your mailing address in the message space. Your original photogravure etching will arrive, carefully flat-packaged, at that address by Yu-Pack in Japan or by EMS elsewhere.


Or if preferred, you can order with this form:


Hokokuji:   The quiet majesty and repose of Hokokuji, the Bamboo Temple, mask the deadly rivalry of shogun and emperor that took place here. Tea is poured and stirred in the chanoyu manner near a little waterfall, where sunlight filters through and illuminates the carpet of bamboo leaves, giving the interior a warm glow. On rainy days a soft mist fills the air, enhancing the depth of the forest. In this neighborhood are houses where Yasujiro Ozu filmed Tokyo Monogatari. The star of many of his films, Setsuko Hara, lived near here. Her retirement from film is one of the most famous disappearances in the Japanese pantheon of stars. Very much like her screen persona, she simply announced she'd had enough of cinema and lived quietly in Kamakura, refusing all entreaties to appear in public again.

Up the road from Hokokuji, a path off to the left leads up Kinubari-san.

The summit gives a panoramic view of the Kamakura seaside, including Enoshima and Mt Fuji on clear days. Yoritomo, though founder of Kamakura and shogun of Japan, spared no effort to please his wife Masako. When she remarked how lovely this mountain might look in the snow, he had the entire mountain draped with silk, hence the name Kinubari-san. All of their descendants were killed by relatives. Yoritomo had his half-brother Yoshitsune hunted down and beheaded, on suspicion of collusion with the Emperor. Yoritomo himself was killed in a fall from a horse in 1199. Masako ruled from behind the scenes during the succeeding Hojo regency. The Hojo regime ended in 1333 with a magistrate's timely conversion of loyalty to an Imperial restoration, which rewarded the new rulers of Kamakura with the designation of Ashikaga shoguns. Their memorial is at Hokokuji.

King Ho-tao called Si-tien into his bedroom, and before Si-tien had time to bow in a proper way and quieten his breathless voice, the king asked him: “Si-tien! I am surrounded by treason. I am also disappointed with my army. My relatives will appear here in a few moments to fetch me for the hangman. Si-tien! Could you advise me how to escape?” Si-tien answered: “Yes.” Ho-tao hastily inquired “How?” Si-tien answered: “You know life? you know how!” Ho-tao asked again: “Should I try to escape by the hidden passage; should I change my wig and put on a mask; or should I disguise myself in your clothes? What shall I do?” Si-tien answered: “Change, if you can, the state of your mind.”   (From Parables of Si-Tien, by Adam Podgórecki (London: Poets' and Painters' Press, 1972)