Note: The video companion to this guide is here. 日本語 Japanese video. At Xpress you can search by mood -- Dynamic, Reflective, Mysterious, Sensual, Spontaneous, Expansive, Elegiac, Intimate, Luminous. Or by texture: Rough, soft, flowing, granular, linear, rhythmic. Also by ink, paper, image size, place, Series, and price. Original photogravure etchings may be ordered from any full-screen page (Hokokuji, for example), with this icon at the lower-right of the screen:

Viewers may also complete the Japanese inquiry form or the Japanese order form in any language. Payment for prints delivered in Japan may be made by C.O.D. (着払). For viewers who are learning the photogravure etching technique, having an original photogravufre etching at hand provides the best instruction, as well as inspiration to see you through the inevitable difficulties.

Galleries where the prints may be seen and purchased are listed at the end of this page.

Photogravure etchings are a type of intaglio print, made by transferring ink from the recesses of an etched or 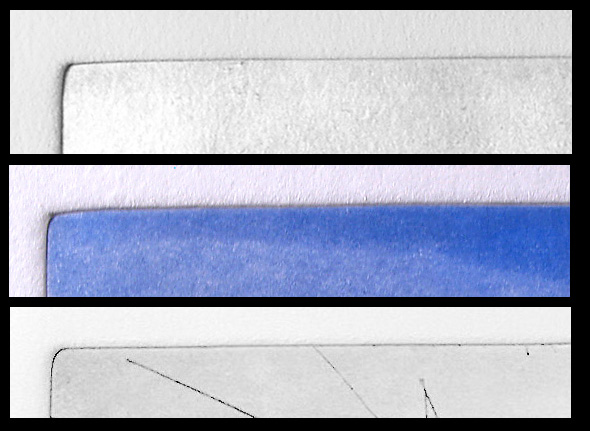 engraved copperplate to specially prepared paper. Etchings, engravings, aquatints, drypoints, mezzotints, and photogravures all require an etching press, the pressure of which creates a platemark (shown at right). This platemark, and the tonal nuance of the printed impressions, distinguishes intaglio works from woodblocks, lithographs, and silkscreens. Photogravure (also known as héliogravure, or gravure à l'aquatinte), uniquely among all the graphic arts, enables variable depth of etching, creating a great variety of tones and textures. These three-dimensional forms accentuate the light and shadow of the image, making it come alive in an unparalled way.

These various tones and textures work together with line, form, and composition to create an overall impression. The physical qualities of the print are inseparable from the impression or mood they evoke in the viewer. A rough surface might suggest a wild feeling, while a smooth or soft surface could evoke calm or tranquility. Flowing textures call to mind liquid forms, granular textures a sense of the particular (particle-like). Rhythmic textures are made up of repeating elements, from the amoeba-like shapes of the aquatint grain or screen to visible structures, in a recursive series of fractals at different scales of enlargement. Examples of each texture are shown by searching here. Xpress (a name combining quick-searching, expression, and etching press) also enables searches by mood, such as Dynamic, Reflective, Mysterious, Elegiac, Luminous, Intimate, and others, as well as by ink, paper, place, image size, and price.

The photogravure etching technique I use is based on the inventions of W H Talbot and Nicéphore Nièpce in the 1830s. The history of this technique and its relation to printmaking in Europe is sketched in my Inklings essay. This page and the two following describe in detail how to make photogravure etchings. These directions are based on my own experience; at each step of the way there are many variations that will give equally fine results. Much depends on local atmospheric conditions, variations in materials and supplies, water quality, and other factors. The only rule is to do whatever works.

Remove dust spots in film by applying spotting ink with a fine brush; in a digital transparency use the noise filter. Use selective sharpening in a digital image to avoid edge artifacts and grain, and to keep a natural look. For example, don't sharpen clouds or other features that do not benefit from a hard-edge look.

Ultraviolet light (UV) sets off a chemical reaction known as cross-linking or polymerization that hardens or crystallizes the gelatin. When exposed in contact with a transparency (Figure 1), the shadows block most of the ultraviolet (UV) light, leaving most of the gel soluble. Under the transparency's highlights which admit more UV, however, the gel hardens more. Metal-halide light sources give more consistent results and are safer to use than carbon-arc lamps.

The aquatint grain creates microscopic 'lands' on the copperplate which remain unetched. Particles of asphaltum are allowed to rain down on the copperplate and are then fused over high heat until they flow into an amoeba-like shape, as shown enlarged in Figure 2.

The unique look of photogravure depends on the variable depth of the etching, the ability of the copperplate to transfer far more ink to the shadows than to the highlights of the print, and to register subtle gradation of tone. What enables the plate to be etched to various depths is the linear sensitivity of dichromated gelatin to ultraviolet light. Unlike conventional silver-based photographic materials, dichromated gelatin is sensitive to every nuance of light intensity in equal measure. This enables it to register highlight and shadow detail not found in conventional photographs. The gelatin resist is partially permeable: It allows the etchant to seep through depending on how thick or thin the gel is. Where the gel is thin, etching is deep, and where thick the etching is shallow. The deeply etched parts of the plate hold more ink and form the dark parts of the gravure print, the lightly etched parts less ink, creating the highlights. Westwind, Cross-currents, Discovery, Tivoli, Meigetsuin, and Roofwork are examples of prints made from deeply etched plates.

Molecules of gelatin activated by UV light bind to one another in long chains through a mechanism known as cross-linking (Figure 3). Cross-linking makes the resist more or less insoluble depending on how far it extends through the gelatin. The amount of cross-linking, remarkably, tracks the amount of UV precisely, even at the extremes of light and darkness. While ordinary photographic films and papers miss the near-whites and near-blacks because of their uneven sensitivity, UV-sensitive materials register the finest gradations of tone faithfully. Snow tones, for example, are visible in Niseko, Myoko, Kumonodaira, Myoko-4, and Notes From Last Time. 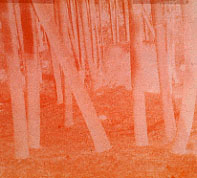 The dried resist looks like a laterally reversed negative (Figure 4), light in the shadows (where the resist is thin) and dark in the highlights (where the resist is thick). It is actually a cast of the image that shapes the action of the etchant in the next step. To prepare the plate for etching, mask the image area and the back of the plate with packaging tape. The print made from this plate is Hokokuji, showing a bamboo garden in Kamakura. (The original print may be purchased here.) 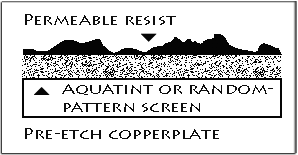 Figure 5 shows an enlarged cross-section of the copperplate ready for etching, with aquatint grain or screen pattern below the permeable gelatin resist. A random-pattern screen may be used instead of the aquatint grain to create unetched 'lands' on the plate.

The etched plate for Hokokuji: 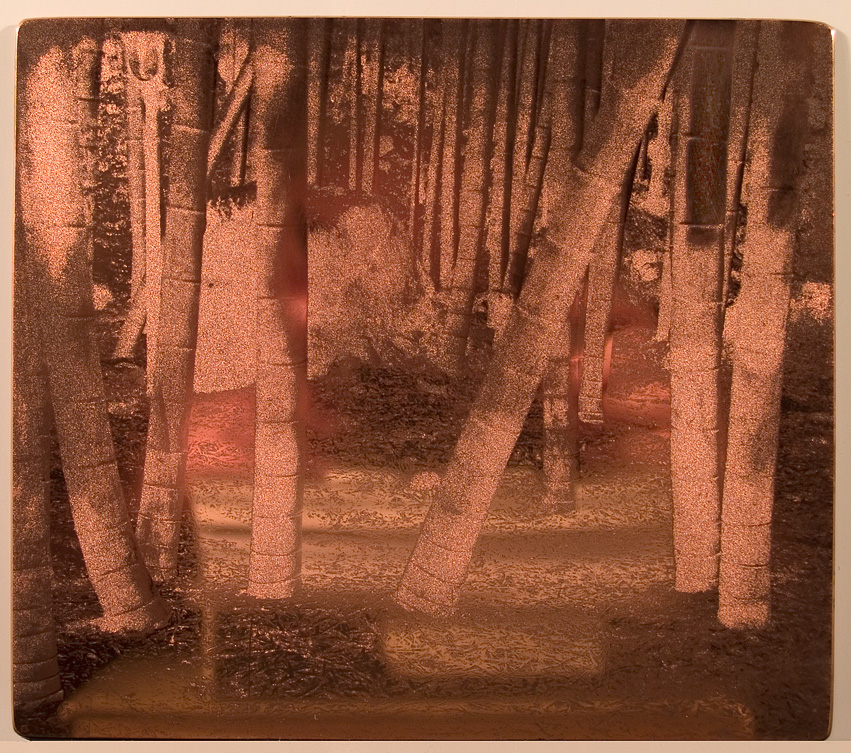 Closeup of etched plate and print made from it: 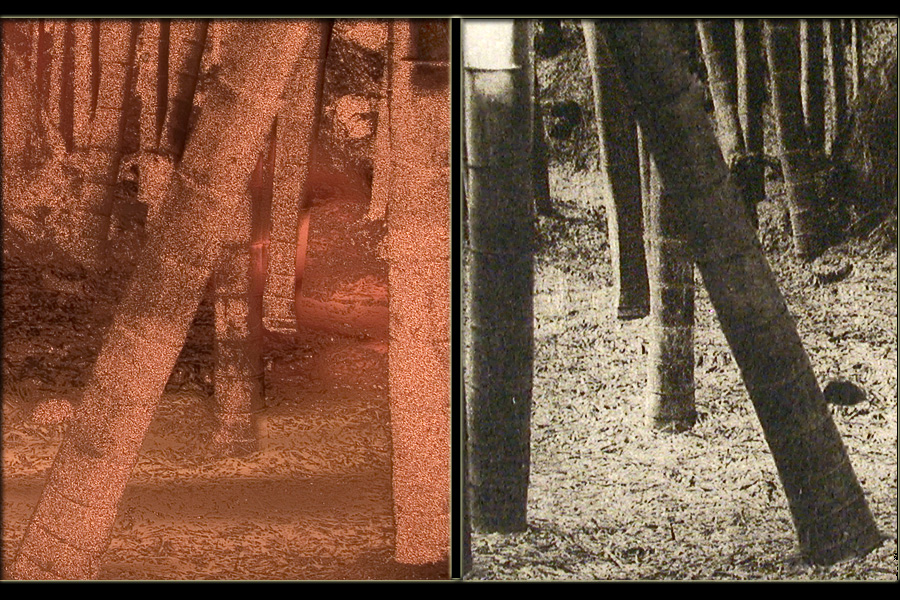 
Original photogravure etchings may be purchased through this website by clicking the order button on any full-screen image page, or from these fine print dealers: